I did not sleep more than a few minutes last night. Somehow I just couldn’t sleep and lay awake and kept thinking about how I should repack what I have left, now that I can’t use saddle bags anymore.

At around 06:00, I got up and repacked the way I had thought about while being awake.

When everything was packed on the bike, and after we had our breakfast, I noticed that the button of the electrical starter was missing from my bike!!!!
Puno did not like me being there it seems. 😦
Luckily Ben spotted the button on the ground and I found the spring still inside the handle bar unit.

Every time I stop now and turn off the engine, I need to dig up the button and spring to get it started again and then put the 2 away safely. I will think of a better solution once I’m in Chile.

We left in the rain, but it cleared up frequently. We managed to find a route that would take us straight to Tacna, and thus avoid having to cross through Juliacca again. We also bypassed Arequipa and saved a lot of time.

The route took us over some of the highest passes of the area. At 4622 meter or 15.164 feet my faithful XTZ was struggling and lost a lot of power due to the thin air. It got cold and on the side of the road there was snow. At a certain point Ken and Ben wanted to have a break.

I was fine and they told me to ride ahead; they would catch up. So I did, and after another couple of high mountain passes, the road got dry and I speeded up. What a joy to ride the winding roads.

After a while, the rain got back and lots of it. The temperature rose, which made me realise I was getting lower and closer to the coast. When I rounded a few last corners the rain was behind me and suddenly I noticed that the bike had regained it’s power. I was down to 2000 meter.

I warmed up quickly and my gear seemed to dry out like in a dry cleaner. I stopped for a break and to dry out in the sun some more. Just after I started to ride again, Ken and Ben caught up. We reached the coastal highway and we were practically back in the desert. Strong winds, dust and heat. Ben and Ken didn’t feel much for staying in Tacna.

So today ends with camping on the beach. Early tomorrow morning we will head for Arica in Chile. Hopefully the border crossing will not take us too much time. 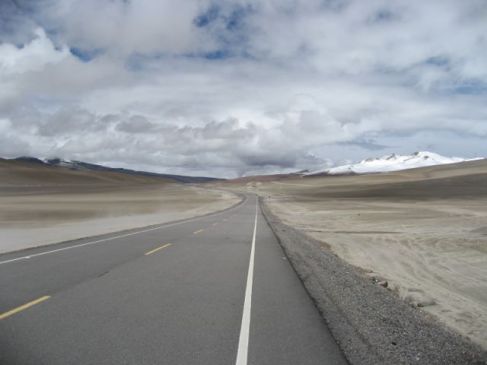