I knew straight away when I woke up this morning: this is going to be one of those lesser days. I looked outside: It rained heavily! Waiting for the rain to stop could take all day, so at a certain point I packed everything on the bike and took off when the rain didn’t come down quite as hard. The sky was filled with a blanket of dark clouds as far as the eye could see. On top of that the fierce winds joined up with the rain. When the rain intermittedly seized, the wind wouldn’t. Many roadworks resulted in huge clouds of dusts, swept up by the wind. It was a battle against the elements.

Finally the clouds broke and some sunshine came through. When the road changed direction, the wind wasn’t continuously trying to blow my tyres from under my bike anymore. Then it was time to fuel up. The fuel station in the midst of nothing had a ridiculous long line of people waiting their turn. I joined up and next to me appeared a Honda Africa Twin with 2 people and a lot of luggage on it. We chatted about our journeys in Spanish for as far as I could manage. Very slowly, the line got smaller. Then the winds and the clouds that we out-ran, caught up with us. It felt like being sandblasted at times and we put our helmets back on, just to protect our faces. 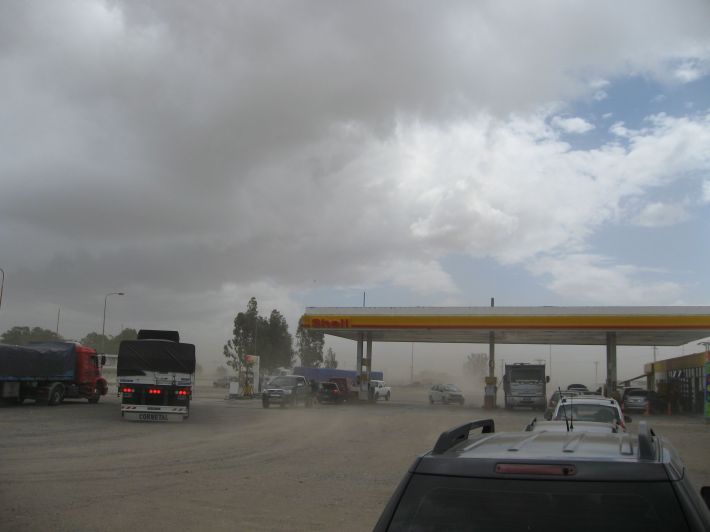 For the rest of the trip today, the winds were always there, and the rain was never far away.

When I arrived in Rio Colorado, the first thing I did was look for a fuel station where I could pay with credit card. As it happened, none of the 7 fuel stations in and around this town accepted credit cards !!!! The fuel station earlier today didn’t either. What is so difficult about credit cards in this part of Argentina? The next thing was finding a hostel or hotel. Finally the 4th one I tried had reasonable prices and WiFi.

After settling in, I checked the oil level of the bike, which was fine. Then I wanted to head out for diner. Just a tad to slow I rode of the walk way in front of my room…… I dropped the bike…. 😦 on the right side this time. When picking it back up, a part of my windscreen broke off. Fortunately I bought new duct tape when I was in Chile. The piece that came of the windscreen is back in to place, held by duct tape.

In the restaurant the waiter spoke Spanish so fast, that I really could not understand what he was saying, no matter how hard I tried. Apparently he assumed that I agreed to whatever changes he suggested to my order. The result was undercooked meat with a lot of bone. At least the salad was how I wanted it. The bill was absolutely not.

Nope, this was not one of my better days. I’m happy that I had few of these and many great days.

We’ll see where the road takes me tomorrow.