Getting up in time this morning was no problem I was somewhat excited. After breakfast, I re-checked everything I put in my top case and tank bag. At around 09:00 I manoeuvred the motorbike out of the hostel and started the last 30 km in South America on my faithful Super Ténéré. Getting close to the airport I almost messed up by taking the wrong exit. That was easily corrected and I arrived at the cargo area of the airport with plenty of time to spare. 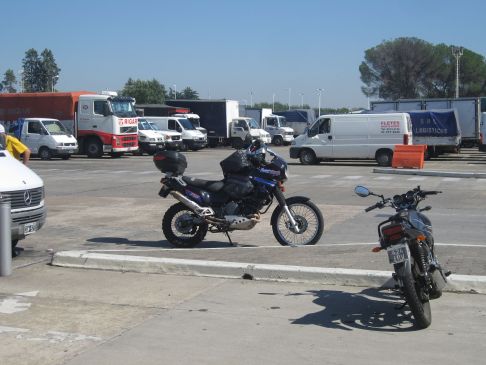 At 09:30, Ariel came to greet me and showed me where to go. While he went inside to start processing documents, all the airport personnel I saw friendly directed me to the cargo bay. Here the motorbike was weighed and then I was directed to a packing area.
Three men were waiting there with a long pallet. They directed me to ride the bike on the pallet and then let me do my thing.
I put my weight on the back and strapped the backside down to the wheel, then took out the front wheel, removed the front fairing and mirrors and loosened the handlebars, so I could move them down. Then the men from the cargo bay strapped down the whole bike to the pallet. All this to make the motorbike as low as possible, in order to save shipping costs. 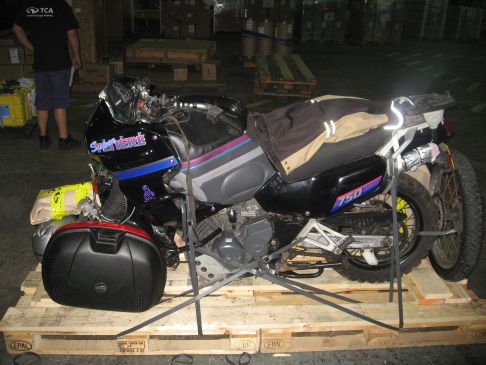 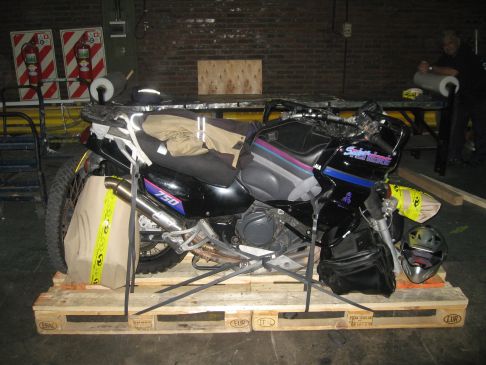 Regulations state, that the battery poles must be disconnected, tyres halfway deflated and as little fuel as possible left in the tank. I was already running the bike on reserve when I left the hostel this morning, so that was fine.

Next thing on the list, was waiting for customs inspection. At a certain moment, Ariel appeared, asking for all the copies I was told to make. Not long after that, He re-appeared with a lady from customs, who had a look at the bike, asked about the fairing, then checked the frame number. THAT WAS IT !!!!!!!
I could not believe it was this easy and everything dealt with in such short time. The cargo bay people wrapped the pallet with the XTZ in plastic and put stickers on it, confirming it had been inspected.

Ariel showed me where to take the minibus to the city centre and said goodbye. Just to be safe, I called Sandra from Dakar motors, but she re-assured me that this was really everything that needed to be done.

When I got back to Buenos Aires downtown, I wandered around a bit and finally went back to the hostel. Sandra called to tell me the final costs, which were quite a bit lower than expected, due to the fact that I managed to make the bike really a lot lower than it is by default, standing on 2 wheels. The amount she mentioned I’ll have to deposit in the bank on friday, since tomorrow is a public holiday. After proof of payment, I will be handed a copy of the Bill of Loading (Airway bill).

In the hostel, one of the guest suggested he’d make asado and asked who would like to chip in. Almost everybody did, and so did I 🙂

The day ended with a great meal, enough wine and beer to be merry and nice international company. 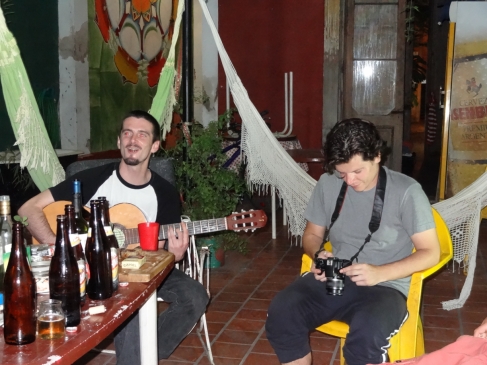 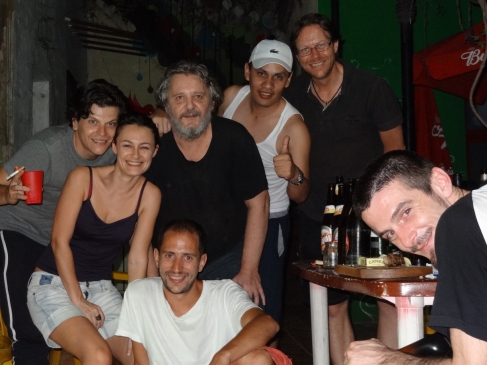 Tomorrow is a public holiday so I will probably go and see something of the city. 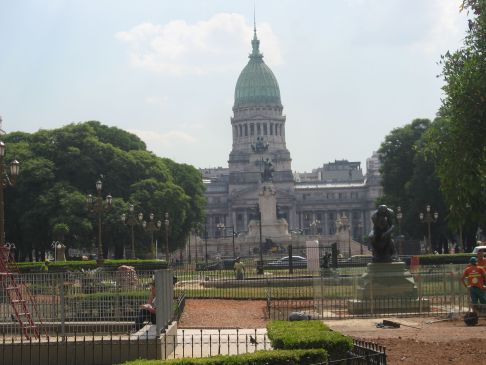